This is Richard Knol, the developer of Sailaway. I’ve been behind the scenes more recently as I have been busy working on some big changes to Sailaway. The biggest of these tasks has undoubtedly been improving the accuracy of the map data so I thought I’d give you an insight into this process in my first developer blog!

The Sailaway maps are all rendered in real time based on the 3D model of the world that is stored on the Sailaway servers. This model was made with data from NASA and a few other sources and it holds the height of the terrain or sea floor at any location in the world.

There are a few issues with that:

Following that data strictly would turn the entire seafloor into a giant staircase. Additionally there are soundings on those maps that give the exact water depth at a certain location. But they don’t say anything about if that point is a peak with a steep slope or a single measurement on a horizontal and flat surface. So here’s what I did to improve the Sailaway 3D model with the US Electronic Charts as provided by NOAA…

First the charts were downloaded. All 1280 of them. Next they needed to be read, or rather deciphered. The format in which they come is called S-57 and it was defined by the International Hydrographic Organization decades ago. It dates from the days when computer scientists tried to write data dictionaries and press various record types into a highly efficient binary format. A time when JSON and XML were never heard of yet! So I deciphered the gibberish and extracted the data that I needed for Sailaway and pushed that into a JSON format. This was several weeks work, but in the end I had a neatly organized collection of 1280 JSON files and
1280 small overview images of the actual charts.

The US charts come in 6 levels. At level 1 there are large overview charts, building down to level 6 where a specific port is shown in high detail. I wrote a program that would process each of these maps starting at level1. It would download a section of the Sailaway 3D model, match the Sailaway depths/heights with the data of the chart and make the necessary corrections.

Unfortunately that technique didn’t work, because it would create a staircase seafloor after the depth regions of the chart are applied. And it would litter the seafloor with spikes or pits at the locations of the soundings in the chart.

So instead I used the charts to verify our own data and make gradual adjustments where needed. If the chart says the seafloor depth is between 20 and 200 meters, and Sailaway has 20.5 or 198, I leave it untouched. If the Sailaway model says 18 meters, the floor is lowered and also the pixels around it are lowered gradually to smooth the sea floor. This way I kept as much of the shape and structure of the seafloor intact as I could.

Then there was the problem of turning land into water or water into land when the coastline would not match the chart. Turning water into land without any information on what this land would look like will result in ugly terrain. There is no fix for this. Sorry. 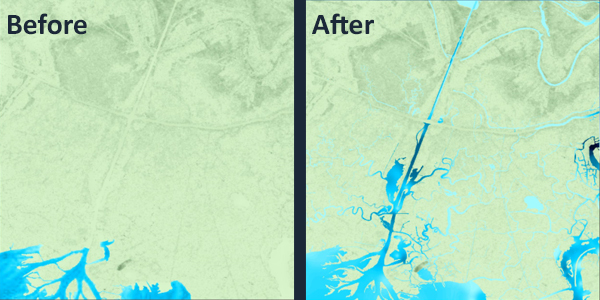 So now that the algorithm seemed to work (again a few weeks work) I could put the computer to work. Starting with Level 1, here is how the numbers look:

In the meantime, I read and imported all the buoys, lights, rocks, shipwrecks and other vital information from those charts into the Sailaway database. This resulted in 120,000 new objects all along the US coast.

So my computer was humming and after many days, when it was already processing the charts for Level 3, I discovered a stupid mistake. Imagine a tiny volcanic island somewhere. A beautiful thing in the Sailaway maps, where you can see the slopes and the crater clearly. But this tiny island is not big enough to have made it on the Level 1 overview charts. Instead it falls in the big area indicated as 200-2000 meters deep. After processing the chart, the entire Island has vanished and has been turned into 200 meter deep water. Of course when the charts of level 3 are processed the island is reinstated, but all of it’s characteristic volcanic shape is gone. It is now a flat surface a few meters above sea level. 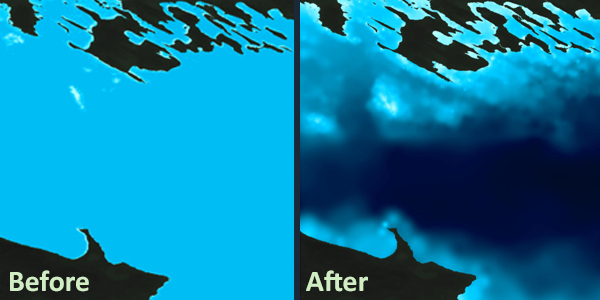 The algorithm was started again from scratch. And after many weeks it is now ready with correct calculations. Yay!! The result is a more accurate seafloor, and a very ugly coast. The last is because after processing the 2D charts, a pixel is either land or water. Imagine a nice coast with some rocks, some distant mountains, small pebble beaches between the rocks. The chart may have drawn a line over that coast, dividing it into land on one side and water of at least 20 meters deep on the other. The result is a coast of steep cliffs, that plunge into 20 meter deep water. The pebble beaches are gone, and because of the size of the pixels the coast looks like a horrible collection of zigzag cliffs.

To fix this, or at least make the coast look somewhat more realistic, is my challenge for the coming weeks. Wish me luck!

I started work on these map improvements early August. It is now the end of October and I am not done yet and this was only the US coast! The European and Australian coast will be even more challenging. But it is great fun to work on this and see the maps improve. Sailaway becomes more mature with every step we take. 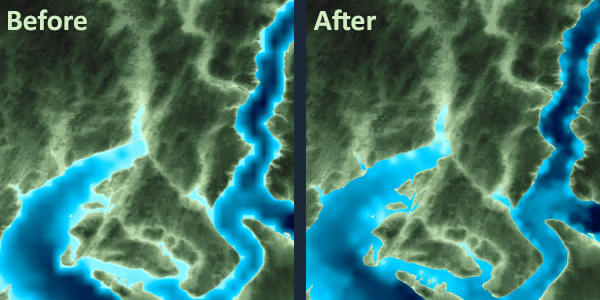 I see players asking for more detail in the terrain often; for ports & marinas, and even trees and buildings. These would be awesome to have, I fully agree. But when you realize that the current work in progress coastline, made up of 10 x 10 meter pixels, already measures 1.5 TB of data. Just imagine the amount of data required when this includes the rest of the world! All that data has to be collected, processed, checked, maintained, refined and find its way to your computer somehow… don’t forget, Sailaway is a persistent online world.

The world is a really big place and I hope that the process behind how I implement this accurate data has become much clearer. Please do not expect the same level of terrain detail in Sailaway that you see in other games. They do not have to carry the weight of the world with them.

Thank you to all of you who have joined us in early access and support this project! I’m sure you can see from the process above, this is a passion project for me and I’m thrilled to see so many people sailing the seas I’ve created.

When we first decided to put Sailaway on sale we made the decision to both support the game via Steam and direct through a stand-alone installer so that we could cater for all potential customer types we might receive in the sailing and gaming world alike.

In theory this was a good plan but it has become apparent over the last couple of weeks that creating 2x PC and 2x Mac versions with every new release is both a lot of work and more importantly a slow process for anyone not on the Steam version.

Non-Steam users are all well aware of the frustration of having to download 3GB(PC)/8GB(MAC) versions each time we release a new version of the game, this current system is unwieldy for players and ourselves.

Steam users however typically get automatic small updates of maybe a couple of megabytes due to how it only updates changed files, this is much faster for everyone involved and allows us to fix issues critical issues much faster.

So what does this mean? Well, after much discussion we have decided that it makes good sense to ask all players to move over to the Steam version of the game so that we can support and update everyone equally under one version of the game.

This means anyone that has so far purchased the non-Steam version of the game will be provided with a Steam key that will allow them to add the game to their Steam account and we are working to ensure that any current progress will be carried over once you start the game via Steam.

We need a bit of time to get all of this in place but thought you should know these plans ahead of time.

Steam has many great features outside of faster automatic updates, it also supports various community features such as sharing of screenshots, guides and has integrated forums that are all accessible while playing the game, if you haven’t taken a look already it is worth having a look at the Sailaway hub: http://steamcommunity.com/app/552920.

For any users who do not know what Steam is we would suggest you check it out at: http://store.steampowered.com/about/ and even maybe make a free account while you are there in preparation.  We will be providing a step-by-step guide on how you do this later so don’t worry if it doesn’t make sense to you right now.

As always your feedback is welcome, we know this could be a big change for some people so please do comment below with any thoughts.

Today is April 24th 2017. One day before Sailaway becomes available to the public after 2 years of constant development.

Sailaway’s main ingredient is passion. It emerged from a passion for sailing and for sharing that experience. Sailaway isn’t just a collection of logic and data and physics. It has been written, changed, rewritten, redesigned and tweaked until it became a true sailing experience.